Founded in 1883, DUAFC is the oldest soccer club in the country still in existence.
In 2008 the club celebrates its 125th anniversary.

INTRODUCTION
Sport in Trinity College, Dublin has a long and distinguished history, but not without its problems. Games were prohibited by the college’s early statutes mainly because of the violence, gambling and drinking associated with them! However, following the successful organization of Dublin University Football Club Foot Races’ in College Park which consisted of some races, throwing a cricket ball and a cigar race, in which contestants had to run with a lighted cigar, an Athletic Union the fore runner of DUCAC was formed in 1882 consisting of the following clubs: Boat, Rowing, Cricket, Football, Gymnastic and Lawn Tennis, Bicycle, Racket and Hurley.

Shortly after this an amendment, was added to the Union Rules to ensure that clubs with a membership of less than thirty be suspended from the Union. As it happens the Hurley Club’s membership fell below this requisite minimum soon after the formation of the Union and then was replaced in December 1883 by the Dublin University Association Football Club, which had been established the previous academic year. Thus, DUAFC became one of the oldest established soccer clubs in Ireland.

In the meanwhile, the first Assoc. Football game in Ireland was played in Belfast in 1878 between two Scottish teams and created a great deal of interest in this ‘dribbling game’ and where the players "butt at the ball with their heads like young goats”. Cliftonville FC was formed the next year. Rugby in Dublin was still the football of the time and the "Irish Times” in October 1883 was concerned that Association Football was being considered, as it was likely to split Rugby ranks and not at all welcome!

1883 – 1939
However, Dublin University Association Football Club, having been founded in 1883 and having become a fully constituted member of the Dublin University Athletic Union in 1884, lost no time in organising games and competing in organized cups and leagues. Although the university team scratched many games as some of the ties were too early for a university team to prepare for, nonetheless some success was to be had in both the Leinster Cup and the Irish Cup itself.

On 30 November 1883 at College Park in the first ever game between a Belfast and Dublin team DUAFC lost 6-0 to Belfast Athletic F.C. In 1884/85 season the club reached the final of the Leinster Cup and after a one – one draw were defeated in the replay by Bohemians – both teams dominating football at this time in the Dublin area.

Along with Dublin Association A.F.C, so called from the fact that they were specially formed to play Association football as opposed to Rugby or Gaelic football, made up of many DUAFC graduate players, they were the first Dublin clubs to compete in the Irish Cup. They competed in the Irish Cup between 1883/84 and 1888/89, 1893/94 to 1899/1900 and then sporadically until 1912/13. Their best season was 1886 when they scored 18 goals without reply in the first four rounds only to be beaten 4-0 by Distillery F.C in the semi-final.

Football was a dangerous enough pastime then. In the 1899 medical journal "The Lancet” it was reported that there had been 96 deaths from football, rugby and association, in the preceding years. One Arsenal player who broke his arm an open fracture, suffered amputation and death soon after, due to infection. So our forbearers deserve great credit for their perseverance.

The club colours at this time were red and black striped shirts and although College Park was used for games others were played at several neutral grounds.

After 1913 and during the first world war years 1914 – 1918, the club ceased to exist as indeed many of the university clubs. Athletic activities in the university stopped completely during the war years and the editor of "TCD” recalled in 1919 that ‘the cricket ground became a meadow, and the tennis ceased to exist; the boats remained unused at Islandbridge and the Pavilion untenanted except by an occasional sentry”.

In addition, the official College history reports that "it was a sign of the times when the Board of 1917 gave permission for sheep to be pastured in College Park, and haycocks were erected, the marks of which were visible for many years after”.

Unfortunately, in the case of Dublin University Association Football Club, the demise was to continue long after the war had ended”.

1939 - 1959
The Leinster FA was established in 1892 and the FAI in 1921. Trinity languished during the early 20th century and despite several attempts to re-constitute the club it was not until 1939 that the club was reformed.

This seems an unusual year with the start of WW2 and some players did leave to join the armed forces. The playing colours were to be black, white and sky blue, said at the time to have been the original colours but there seems to be some debate about this.

College Park was not available for soccer and grounds were used in Clontarf, Grangegorman, Jacob’s and St. Patrick’s Athletic. DUAFC again became affiliated to DUCAC in 1940 and were then allowed to train in College Park on two days per week coming up to the Collingwood Cup in February 1941 – the first mention of this competition in old minute books.

In 1941 the colours tie and crest were designed and remain till today.

The 1940/41 season saw Trinity winning the Universities League and defeat in the Collingwood cup final to UCD. Times were hard and the minutes record serious debate about the purchase of 3 footballs, not the modern balls we know today. The purchase went ahead provided one was kept for special occasions – which it was – a visit by QUB in 1941.

At last in 43/44 College Park was again obtained for regular play and Saturday matches were possible. A second 11 was now playing regularly although a second ground was a problem.

Glasgow University visited in 1946 winning 5-1, and TCD were to tour Scotland in early 47, beating Edinburgh 6-1 and losing 3-2 to Glasgow. Further Scottish tours and visits would follow. The end of the decade once again saw defeat at the hands of UCD in the Collingwood Cup Final. 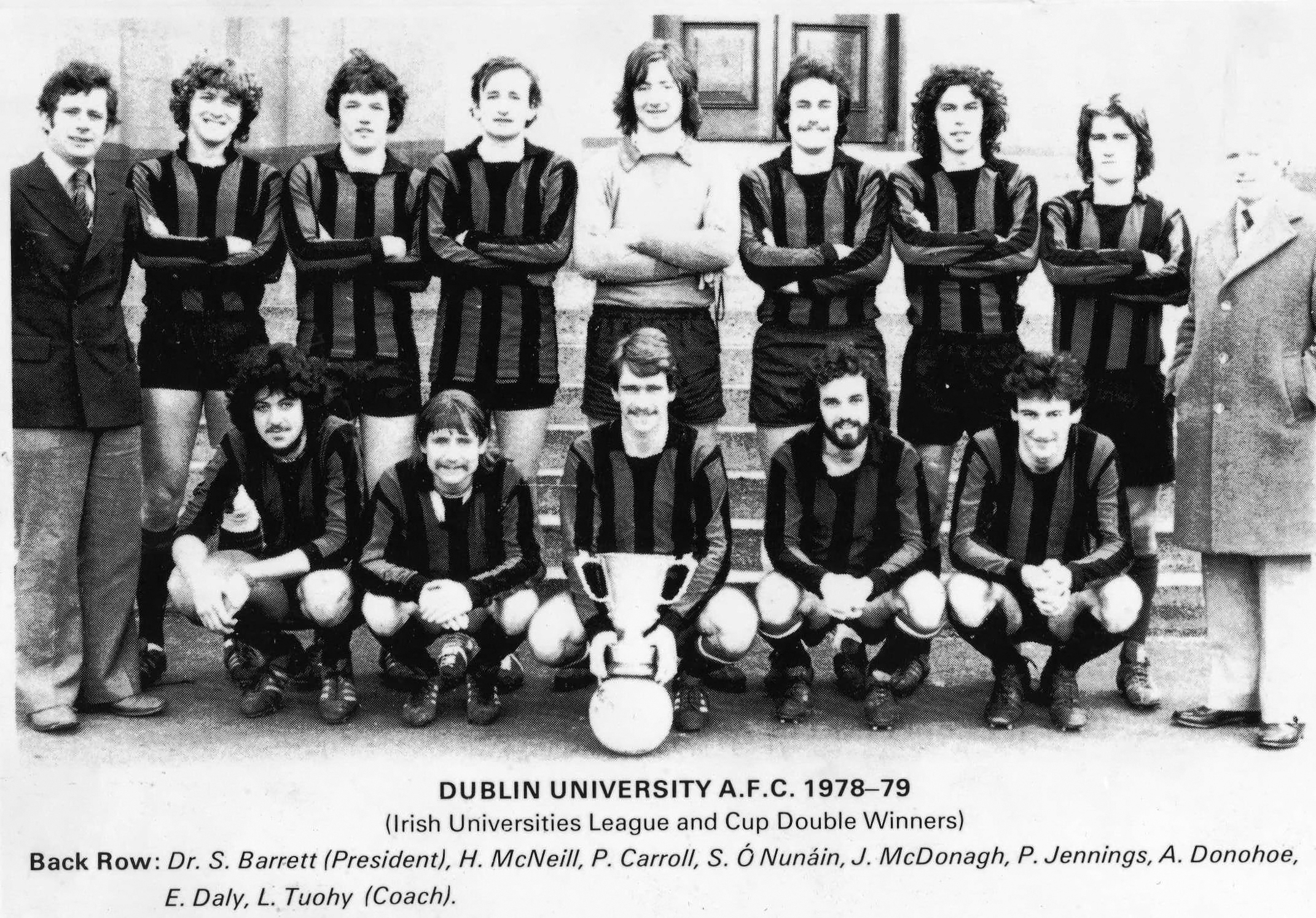 In the early 60’s the Club continued to strive to win the ‘Holy Grail’ the Collingwood Cup but it was not until the late sixties that this was achieved for the first time. In the season 1966/67 the Collingwood was won by DUAFC for the first time with Tommy Nolan as Captain when they defeated Queen’s in the final in College Park 1-0 with a penalty scored 5 minutes from the end by the unlikely named right winger "A.Nono”.

That 67 Collingwood winning team were presented with the First Trinity Sports Hall of Fame Award in 2007 at a sports reception in the Pavilion Bar, College Park. Trinity in the late sixties played in the Leinster Senior League and the next Collingwood final was in the 1969/70 season when we lost narrowly 1-0 to Galway in Fahy's field Galway.

Although the first mention of a trainer in the clubs history was in the 1955/56 season when a Mr. J. Redmond was in charge by the late sixties early seventies the club now employed professional coaches on an annual basis including Ronnie Nolan, Bunny Fulham, John Colerain, Arthur Fitzsimmons and ex Rovers and Irish International John Keogh.

In the mid seventies, Club President the late Aidan Duggan was followed by Sean Barrett and in 1975 DUAFC was elected to the League of Ireland ‘B’ Division and Liam Tuohy, former manager of Shamrock Rovers and Ireland was appointed as coach, and this was a most successful period when the Collingwood was won for only the second time in 1979 with Ken LeGros as captain. This win and the club’s 125th Anniversary was remembered and celebrated at a dinner held in the Dining Hall, College on Friday May 22nd 2009.

Liam Tuohy’s tutelage was followed by a period with Billy Dixon also a former Rovers player as coach followed by Eamon Carberry, Terry McAuley and then Harry Cobbe ex Bohemians and Dundalk player. In 1983, the Club’s Centenary year, it won its first Harding Cup for Freshers with Brian McCloskey as Captain and a dinner was held here in the Dining Hall in February 1983 to celebrate the Centenary. The Harding Cup was won again in 1992 and 1997. In the late eighties Brian McSharry, Captain in 1976/77 and player in the 1979 Collingwood Winning side, took over as coach and his side reached the Collingwood final in 1990 only to lose out narrowly to Cork 2-1 AET at the Mardyke.

Billy Young, ex Bohemians Manager, took over for one year in 1994 to be followed by Adrian Fitzpatrick who lead the team to another Collingwood Final in 1996 only to be defeated narrowly 2-1 by U.U.J. In 1997 the club had a very successful season reaching the semi-final of the FAI Intermediate Cup and the second round of the FAI Cup proper losing 3-0 to Bray at Santry.

Another Collingwood final was reached in 2000 with Terry McAuley and Jimmy Cumiskey as coaches, but unfortunately the team lost out 10-9 on penalties to Cork with the final score being 0-0 at full time and after extra time. In 2005, the National League of Ireland ‘B’ Division became the League of Ireland ‘U21’ Division and the League moved to summer football. The Club continued to play but found summer football very difficult with all the attendant problems of keeping students in Dublin for the summer.

After three years of summer football it was decided to re-enter the Leinster Senior League for the season 2008/2009. This proved a most successful return to Leinster Senior League football with the club winning the Major 1D division and also the Joe Tynan Cup. In this season also, DUAFC reached the semi-final of the Collingwood in Cork losing narrowly 1 – 0 to NUIG while the Freshers lost out in the Harding semi-final to QUB in Limerick.

Apart from the 1st team and the Freshers team, the club also has a Graduates team "Trinity Corinthians” who have been very successful in their own right and a Trinity internal ‘Mega League’ which has up to 20 teams annually playing 11-a-side at Santry on Saturdays and Sundays during term. Tommy Dunne directs this operation very successfully and with great enthusiasm.

Finally, with plenty of young exciting players at the club the future looks bright for soccer at Trinity College, Dublin.